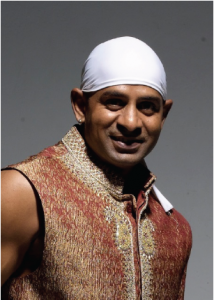 He began practicing at age five in India. He was initiated by Swami Veda Bharati of the Himalayas into the highest Himalayan tradition. He created his own unique style of Yoga called KRIYOGA. The world ‘Kri means ‘new life”.

His talents for both Yoga and motivating and organizing people were obvious and his determination led him on a journey to bring new Yoga systems to the world. For the past 2 decades he has mastered many styles of Yoga i.e., Hatha Yoga, Raja Yoga, Ashtanga Yoga Kundalini yoga, Himalayan meditation and Philosophy of Yoga. And also his mastery of martial arts (he is a 5Dan Black Belt) and various fitness science’s helped him to incorporate additional ways to strengthen the body and mind. His Kriyoga System has made him as one of the most successful and famous Yoga Master in World.
He eventually travelled to Singapore (1994) and with hard work and determination he found success. Soon he was gracing scores of billboards in Asia as a unique and new style Yoga Master. He has become a mainstay of magazines, is Hong Kong’s first New Age Wonder and has appeared numerous times on network television in Asia. He is the pioneer in bringing yoga into the limelight throughout Asia.

He has travelled intensively spreading his teachings throughout Asia, the U.S.A and Australia. His extensive knowledge of effective exercise and postural analysis has made him in demand by high profile clients, corporate, models, and sports professionals. He leads Seminars, Workshops, Courses, and Lectures on the subjects of good mind and body health. His compassion, wealth of knowledge and mindfulness earned through decades of practice and teaching has created a Yoga boom in Asia. His success in establishing Yoga in Asia has him honored in a book ‘The Great Indian Yoga Masters ‘that was launched in London in 2002, as one of the top 8 Top Indian Yoga Masters in the World

Master Kamal has contributed articles to International Yoga magazines, and have appeared numerous times on television network television network in Singapore, China, Taiwan, Bangkok and Hong Kong and in varied Newspapers and In-flight magazines like Discovery Magazines and the Silk Road.

Featured his home video DVD ‘Passion of Yoga 1,2 & 3 series, the Power of Prana and the Power of Sun’, Yoga Bliss, Yoga Shakti, the Warrior, Yoga Fire & Andhra Ashtanga., an instructional DVD which guides through a rejuvenating flow of postures, breathing, concentration and meditation

He Performed 60 hrs Yoga episodes on TV programmed “Yoga for All” that telecast in Vietnam, and been rated top with the highest viewers. 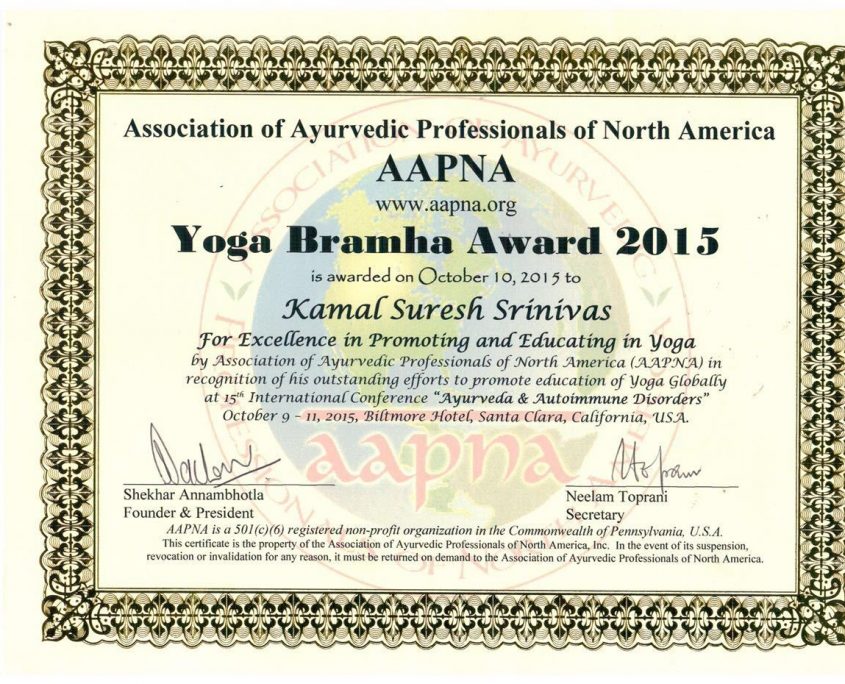 He is the author of the books ‘’Yoga Sun’’ (English) and ‘’Andhra Ashtanga Yoga” (English) and Kriyoga Vata, Pitta & Kapha (in Thai) ’’ With all of his accomplishments, Master Kamal remains energetic and determined to assist people in gaining better mind and body health. With this as his goal, he is bringing his Kriyoga Lifestyle and Health discipline to the world Today, Master Kamal and Kriyoga are at the forefront of the World’s goal for better solutions to many physical, mental and emotional challenges people face today.

Recently he introduced ‘Infrared Hot Yoga’ for the first time in Asia. He also introduced ‘Ayurveda’ the ancient Indian Wisdom of healing & rejuvenation to the people of Thailand. This makes Master Kamal and his Kriyoga centers, as the NO.1 center in Bangkok to bring Yoga, Ayurveda and Health consultation under one roof for total wellbeing. At present he has 3 centers (4th branch opening in January 2015) in Bangkok. The Kingdom of Thailand

”I’ve combined the unique elements of Yoga and other disciplines that I have studied over the past twenty years to develop superior mental and physical health. This is by improving muscular strength & endurance, cardiovascular conditioning and bone strength, glandular efficiency, flexibility, mental fitness and improves communion between the material and spiritual worlds.” Master Kamal

For more details visit our website www.kriyoga.com Please write to us at: info@kriyoga.com